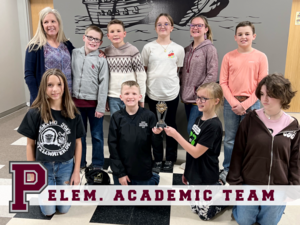 The 5th-6th grade Academic Team had a very exciting weekend WINNING regionals! They will advance to the OJABA state tournament on April 1. Congrats and good luck!
Upper Elem. Advance to Academic Bowl State Tournament
This past Saturday, January 21, the Perry Upper Elementary School’s 5th and 6th grade academic team competed in the Oklahoma Junior Academic Bowl Association (OJABA) regional tournament in Dale, Oklahoma.
Perry was the third seed out of five teams. They won their first game against fifth-seed Locust Grove Elementary and their next game against the no. 1 seed Vinita Will Rogers A team.
In the third round, Perry lost to the no. 2 seed Dewey Middle School, which dropped Perry into the losers bracket for round four. They redeemed theirselves with a win over Vinita Will Rogers A team to advance to the championship.
They faced undefeated Dewey Middle School in the championship match. Perry beat Dewey twice to claim the first place trophy and punch their ticket to state!
The team will now start preparing for the Academic Bowl state tournament, which is scheduled for 10 a.m. on April 1. The location has not yet been announced.
The team is coached by Mrs. Shanna Sweet.
Congratulations and good luck at state!
Published January 23, 2023