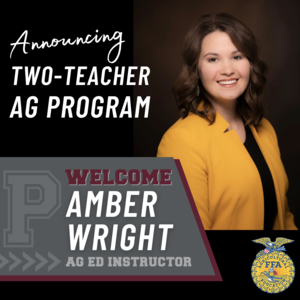 Perry Public Schools is pleased to announce a two-teacher agricultural education program! In addition to Keeland Nix who was previously introduced, we’d also like to welcome Amber Wright to the ag teaching team! Together, they will lead our agricultural education program and FFA chapter. Click the headline to read more.
Perry Public Schools is pleased to announce they will launch a two-teacher agricultural education program beginning in August. The school district has been afforded this great opportunity by the Oklahoma Department of Career and Technology Education and the State Department of Education.
As previously announced, Keeland Nix was hired to fill the open ag teaching position. The search continued for a second agricultural education instructor and PPS identified Amber Wright to join the team. Together, they will lead the program and FFA chapter.
“With the addition of a second ag instructor, we can offer more programs to entice a wide range of students to get involved, and be prepared for numbers to increase in the future,” says Brandon Hight, PHS principal. “We look forward to adding new programs like horticulture, food science, agribusiness, and added intro classes for 8th and 9th graders; all opportunities we haven't been able to provide in the past.”
There are currently about 65 students enrolled in agricultural education at PPS and the goal is to see about 85-100 students participating in the ag program. Each instructor will be able to have focus areas and dedicate more time to students with specific interests; from the classroom, to the shop, to the show ring, and across the state attending contests.
Amber Wright is originally from Lindsay, Oklahoma where she graduated high school in 2015. The influence she had from her high school agriculture teacher is what fueled her passion to become an ag teacher herself.
She has been a graduate teaching assistant at Tarleton State University in Stephenville, Texas for the past two years. Prior to that, she completed her student teaching at Fort Gibson High School.
Wright joined the livestock judging team at Connors State College and gained her associate’s degree before attending Oklahoma State University. At OSU, she was a member of a very successful livestock judging team, winning championship titles at 10 different contests across five states and claimed the national championship at the North American International Livestock Expo. She was also on the meat judging team and meat animal evaluation team at OSU.
Her bachelor’s degree from OSU is in animal science and agricultural education. Wright is scheduled to complete her master’s degree by August of 2022 from Tarleton State University in animal and veterinary sciences, with a concentration in meat science.
Wright and her fiancé, Braeden, plan to move to the Perry area and continue their show pig operation and involvement with the livestock industry.
“I'm very excited to have the opportunity to share my passion for agriculture with students and community members in Perry,” Wright commented. “My ag teachers and my grandpa, who is a former ag teacher, have greatly influenced me and have been tremendous role models and mentors for me. I hope through my experience as an ag teacher I can have the same influence on students.”
Published June 2, 2022 Print