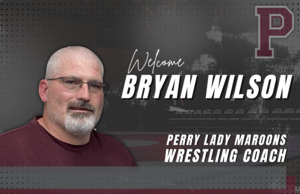 Perry Public Schools announces Bryan Wilson as the new head coach for the girls wrestling program. Click the headline to read more about Coach Wilson.
Perry native, Bryan Wilson has been hired as head coach for the Lady Maroons wrestling program. The hire was made official at a special school board meeting held on Wednesday, May 25 at noon. He fills the position previously held by Richard Davis.


Wilson is a 1998 graduate of Perry High School and a Perry Wrestling alum. He was a state champion wrestler for the Maroons in 1997 and 1998, as well as a member of two state championship teams. He went on to wrestle at the collegiate level at the University of Central Oklahoma and Bacone College.


For nearly 20 years, Wilson has been a little league wrestling coach and is a founder of the thriving Perry Wrestling Academy (PWA). He also served as a lay coach for the Perry High School wrestling team when the Maroons won a state title in 2006.


Wilson and wife, Stacy, have been married for nine years and together they have four children, who all dominate on the mat for the Maroons. Teaguen Wilson was a state runner-up, Jaden Oakes was a state qualifier, Brylie Wilson was the first Lady Maroon wrestler to graduate from PHS, and Cami Wilson, who won USA state and freestyle state wrestling, will be entering the 7th grade at PJH this fall.


Coach Wilson commented, “I’m excited to be coaching this program. We’re going to work hard, have fun, and build something special with the talented girls we have.”
Published May 26, 2022 Print