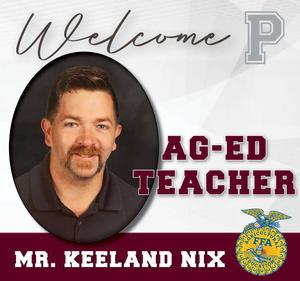 Welcome our new Agriculture Education teacher and FFA Advisor, Mr. Keeland Nix! He comes to us from Missouri and has 16 years of experience teaching Ag students. Click the headline to read more.
Perry Public Schools has hired Keeland Nix as the new Agriculture Education instructor and FFA Advisor. He fills the position previously held by Kara Winans.


Nix attended NEO A&M in Miami before transferring to Oklahoma State University to earn his bachelor’s degree in Agricultural Education-Leadership. He is currently working toward his Master of Science degree at Missouri State University, projected to graduate in December 2022.


He and his wife of 20 years, Lacy, have two daughters; Payton who is entering her freshman year at Oklahoma State University, and Rylan who will enroll as a sophomore at Perry High School. He is originally from Mountain Grove, Missouri, but their family looks forward to being closer to Stillwater as their oldest daughter experiences OSU.


Agriculture runs in the family; he has a younger brother who is also an Ag-Ed instructor at Carnegie High School.


In his career, one of the highlights was having a team win the state FFA dairy contest and compete at the National FFA Convention in 2014. Nix commented, “I like seeing students succeed at all levels: seeing those light bulb moments in the classroom to award winners on stage.”


“The knowledge, skills, competitions, and leadership experience students are gaining from this program are helping produce leaders that feel confident and prepared for college, trade school, or the workforce. I look forward to seeing Mr. Nix continue the success of this program,” says Dr. Terry McCarty, superintendent of Perry Public Schools.
Published May 17, 2022 Print