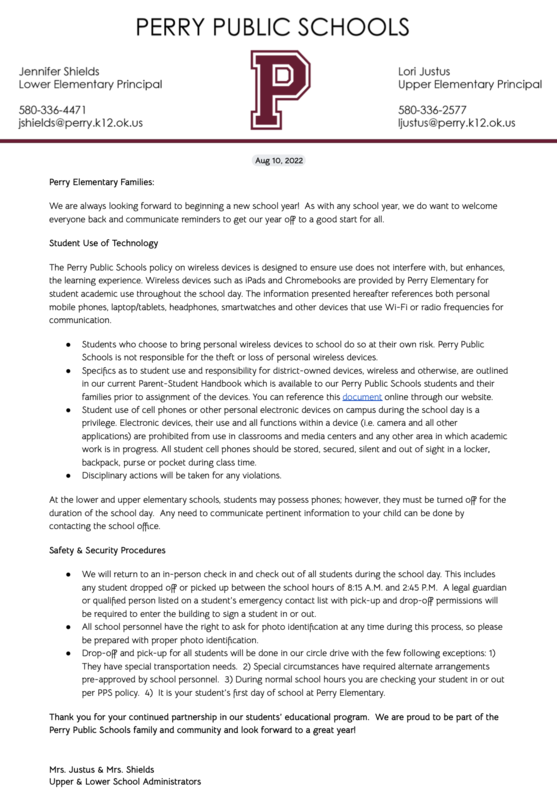 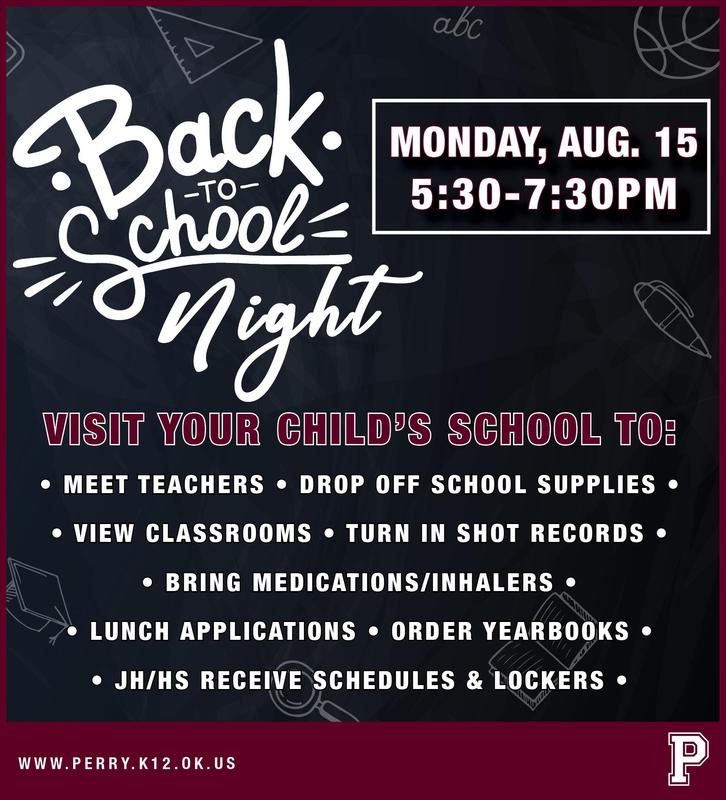 Back to School Night

Make plans to attend our annual Back-to-School Night on Monday, August 15. Stop by your student’s school site anytime between 5:30 - 7:30 p.m. to meet teachers, tour the building, receive class schedules, locker assignments, and more. Back-to-school night is a great time for parents to bring medications, inhalers or present any health-related concerns. Updated immunization records and any other paperwork can also be turned in at back-to-school night.

Parents of high school students taking concurrent enrollment through NOC will have a meeting during back-to-school night that begins at 7 p.m. in room 131 at the high school.
Published August 11, 2022 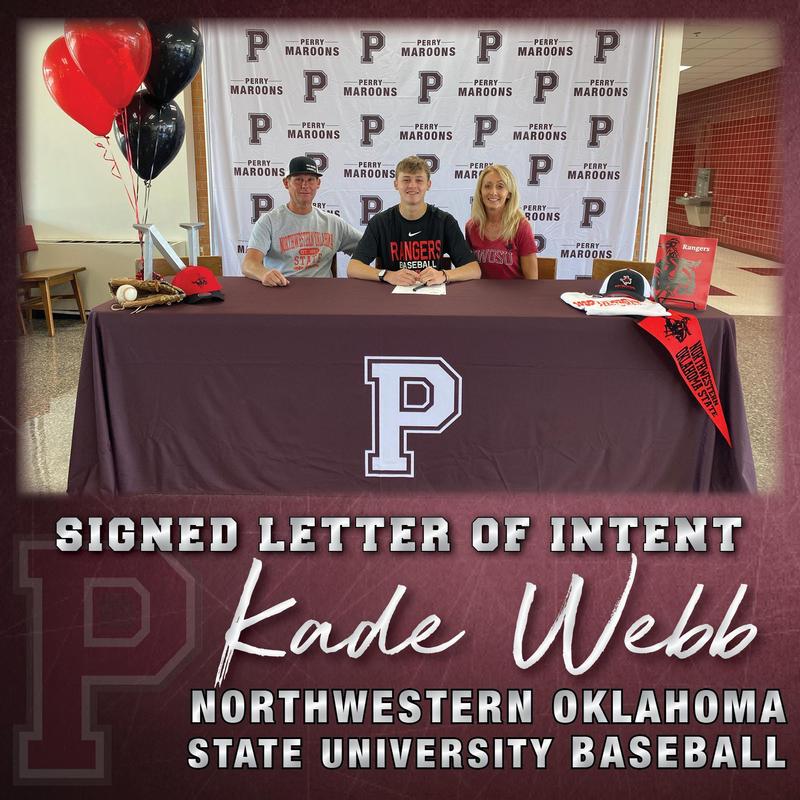 Recent 2022 PHS graduate, Kade Webb, signed his letter of intent to play college baseball at Northwestern Oklahoma State University in Alva. Family, friends, teammates, and Perry Public Schools staff gathered on Wednesday, August 10 to congratulate him as he signed his letter of intent. Webb was an outstanding athlete at PHS, playing basketball and baseball for the Maroons. On the baseball team, he was an outfielder and pitcher. He was recruited by the NWOSU Rangers as a left-handed pitcher. He plans to major in business.
Published August 12, 2022 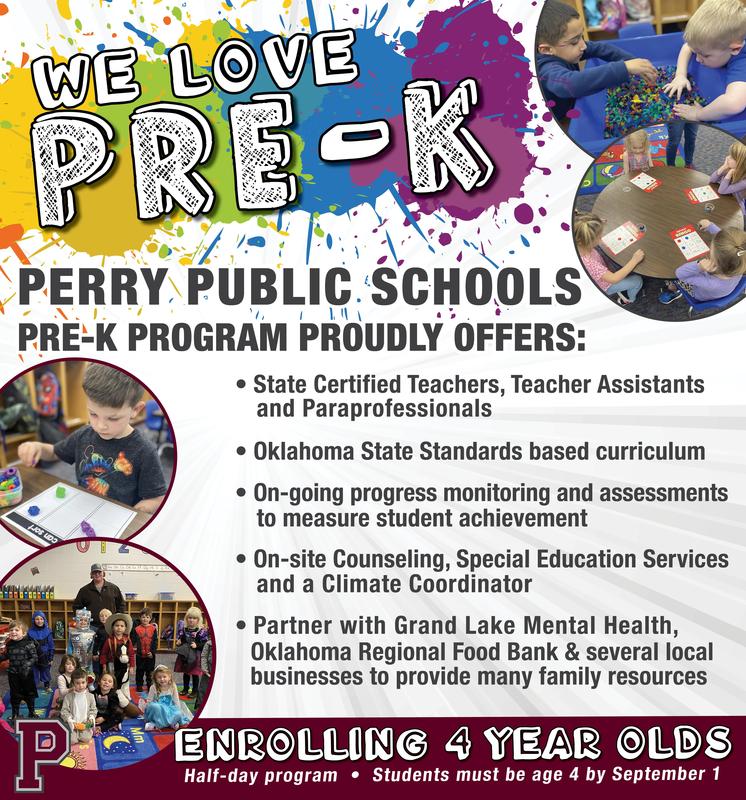 We learn so much and have loads of fun in our Pre-K classrooms! Our incredible Pre-K staff is focused on seeing students excel through Oklahoma Academic Standards based curriculum, progress reports, and student support. Classes are filling up, but there are still a limited number of spots available to enroll your 4-year-old in Pre-K this school year. Click the headline to view Pre-K info and enrollment packet.
Published June 27, 2022 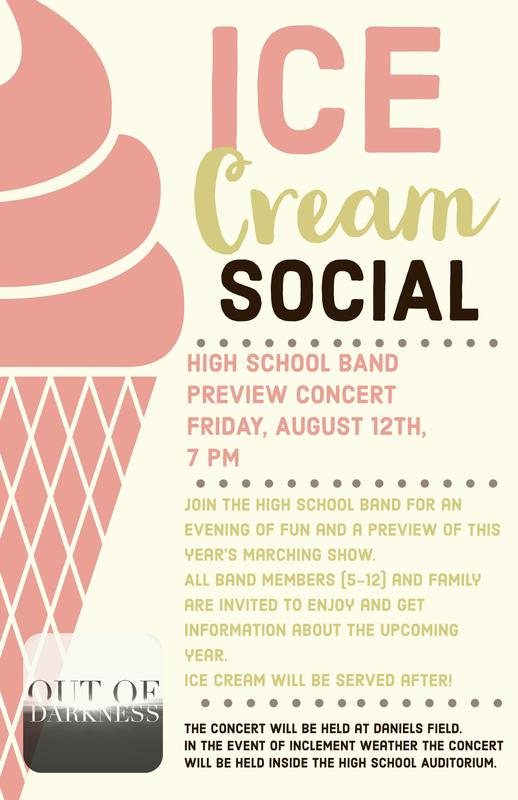 This Friday, Aug. 12 the PHS Band invites you to their preview concert of this year's marching band show at Daniels Field, beginning at 7 p.m. This event is open to the public. All band members, 5th-12th grade, and families are strongly encouraged to attend to receive band information for the upcoming year. Ice cream will be served after.
Published August 10, 2022 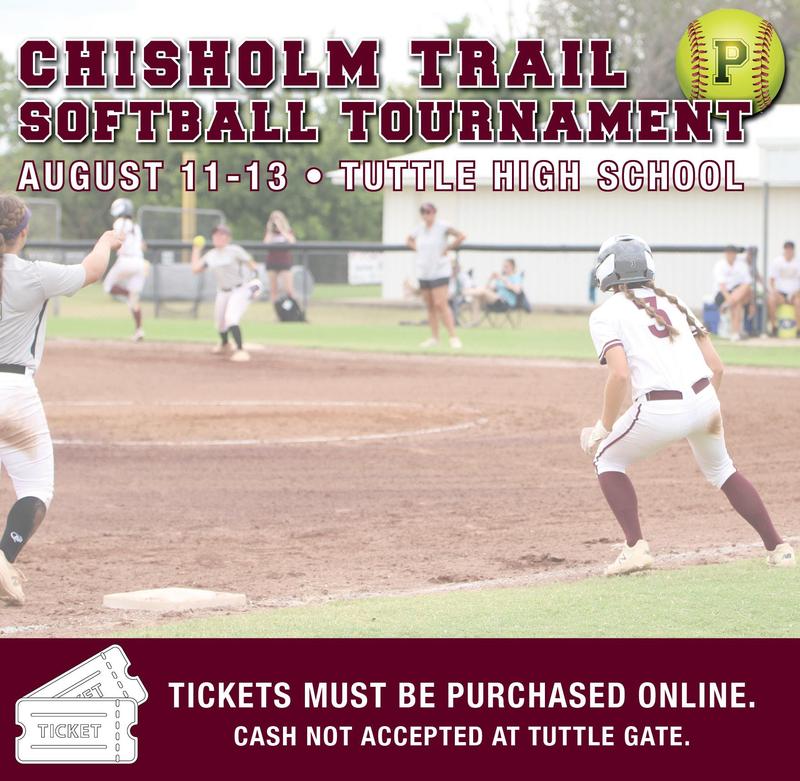 The PHS Lady Maroons softball team will compete in the Chisholm Trail Tournament at Tuttle High School on August 11-13. Tuttle uses GoFan digital ticketing for entry to all athletic events. They will NOT accept cash at the gate. Purchase tickets online (or in the GoFan app) for each day of the tournament using the links below. 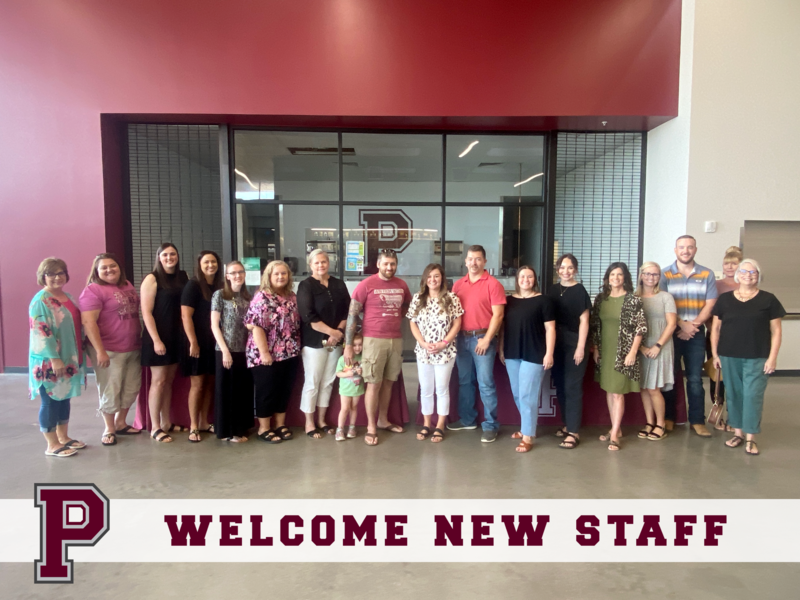 As the first day of school approaches, Perry Public Schools would like to introduce our new employees to the community. We are welcoming 17 new faces to the school district! Click the headline to read more about our new teachers, coaches and staffing changes.
Published August 9, 2022 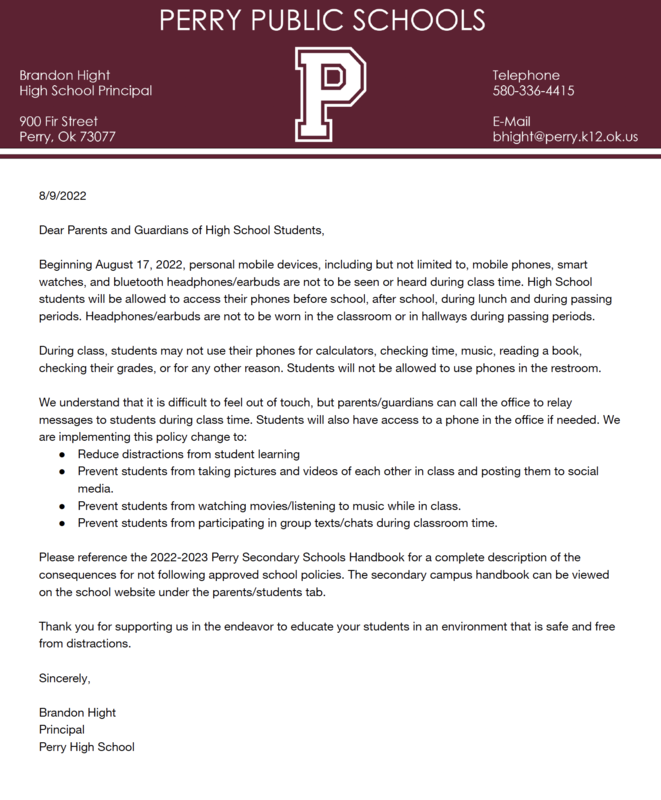 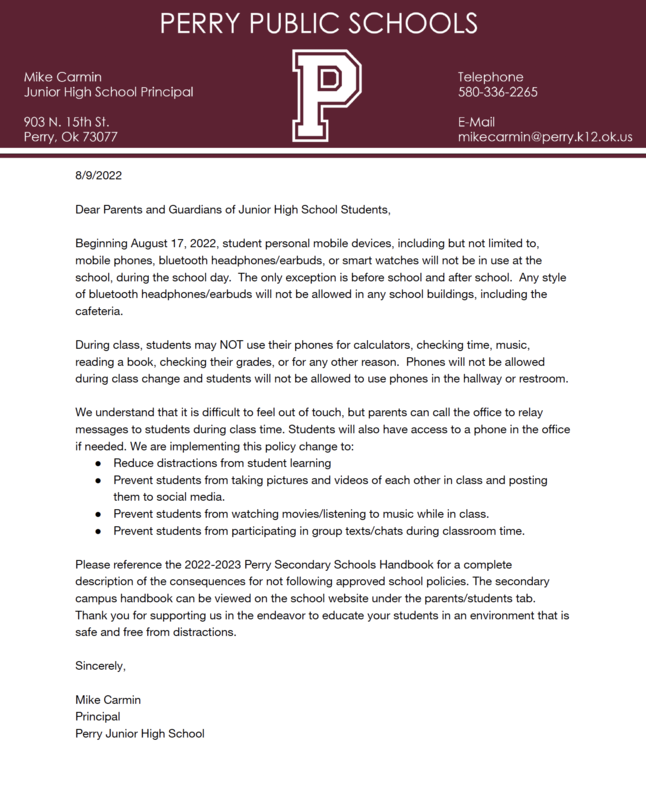 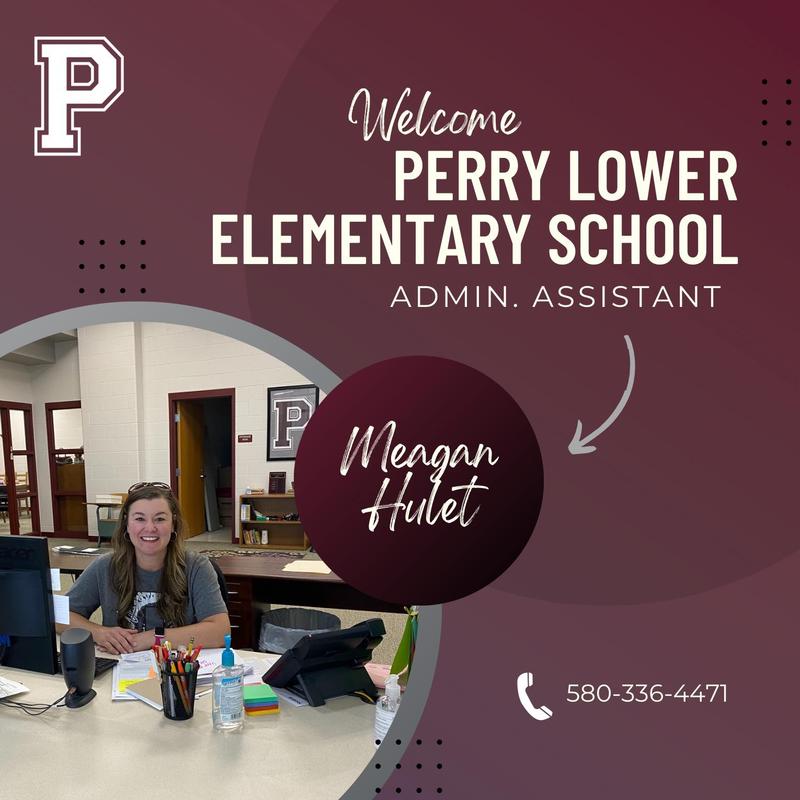 Welcome a new face to the Perry Lower Elementary School front office - Meagan Hulet is now serving as the administrative assistant and we are thrilled to have her on the team! You can reach her at 580-336-4471.
Published August 8, 2022